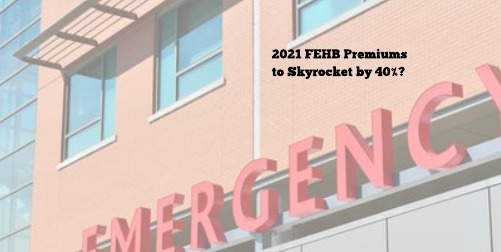 Study from California Government Finds Healthcare Premiums Could Skyrocket Over 40% for some plans in 2021- What Does this mean for the Federal Employee Health Benefits (FEHB) Plan?

Covered California, an independent fractal of the California State Government, released results from a thorough analysis they conducted of the Nation’s average health insurance premium increases. The report, which was published on March 22nd, found that individual plans could increase from 4% to 40% due to the COVID-19 emergency alone. The average increase for the country from 2019 to 2020 was 3.9% and that was down 4.4% the previous year. So if there had been no pandemic, a 2 to 5% uptick might be expected. The 4% to 40% range detailed in analysis describes what is expected to be added on top of the usual average premium change.

Although the correlation between the nation’s average and the respective average for federal employees doesn’t have a firm statistical backing to declare causation- glancing back at the prior year doesn’t help. The 3.9% increase mentioned above contrasted with an even higher average for the Federal workforce- 5.6%. But if you go back to 2019, the country’s 4.4% was greater than the FEHB average premium increase (which was lowest since 1996) of 1.5%. The nation’s average does include the FEHB figures, too, so it’s hard to say how much the 4% to 40% range from the study applies to Federal workers (it is also a fairly wide spectrum- a safe bet would be to say a premium change of 10% or less would be one of the better possible outcomes.) The factors determining the prices of health plans aren’t set until the end of September, however, and this is but one of many unknowns that the COVID-19 crisis has left high up in the air, for now.