Is December A Good Time For A Roth Conversion? 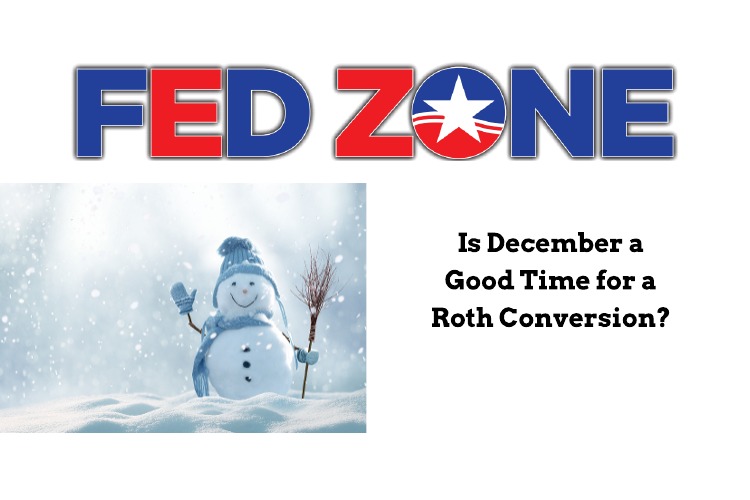 The following are the recommended steps to be followed in a Roth IRA conversion:

Step 2. If an individual has a fully deductible traditional IRA he or she wants to convert to a Roth IRA, then upon conversion the individual will have to pay federal and state income tax on both the IRA contributions and the accrued investment earnings in the IRA. Only after-taxed dollars get to go into Roth IRAs; therefore, this means that if the IRA owner initially deducted his or her IRA contributions, the owner will need to effectively “give that deduction back”. The IRA contributions and any investment gains will be added to the IRA owner’s taxable income in the year of conversion. A Roth IRA conversion performed in December 2020 will result in additional taxable income in tax year 2020.

Even though the federal employee in this example made after-taxed contributions only to the $25,000 traditional IRA, IRS rules say that the employee must consider the fair market value of all of the employee’s IRAs to determine the portion that is considered “after-taxed” dollars. Note that traditional IRAs are considered individual IRAs even for individuals filing a joint return. An individual’s IRA is not combined with the spouse’s IRA balances for purposes of the pro-rata rule.

To make things somewhat more challenging, an individual cannot calculate the exact pro-rata percentage until the end of the tax year (Dec. 31). The pro-rata calculation is not based on the balances in the IRAs on the date of the conversion. The total value of all IRAs is used in the pro-rata rule the account values as of December 31 of the year the conversion is made. Any growth or loss in the funds remaining in an individual’s IRA from now to the end of the year will therefore have an impact on the pro-rata calculation.

Timing a Roth IRA conversion: Is the month of December an optimum time for employees to perform a Roth Conversion?

Some questions for employees considering a Roth IRA conversion sometime between now and Jan. 1, 2021:

I believe a Roth IRA conversion would be a good financial move for an employee who: (1) Likes the idea of investment earnings that grow tax-free; (2) wants to lower their future taxable income in retirement and their future gross income for Medicare Part B premiums “means-testing” purposes; (3) thinks that their overall federal and state marginal tax rate will be higher in retirement than it is currently; or (4) wants to avoid required minimum distributions (RMDs), which the IRS mandates starting at age 70.5 (starting at age 72, if an individual was born after June 30,1949) from traditional IRAs.

On the other hand, I believe a Roth IRA conversion would not be a good financial move at this time for an employee who: (1) lacks liquid assets (cash) to pay the likely tax bill generated by the conversion; (2) needs the converted funds in the next five years. This is because distribution of earnings and rolled-over amounts risk being subject to a 10 percent early withdrawal penalty if funds are withdrawn before the five-year conversion anniversary mark; or (3) will likely be in a lower overall marginal tax bracket in retirement.

Unless certain criteria are met, Roth IRA owners must be 59½ or older and have held the IRA for five years before tax-free withdrawals are permitted. Additionally, each converted amount may be subject to its own five-year holding period. Converting a traditional IRA into a Roth IRA has tax implications. Investors should consult a tax advisor before deciding to do a conversion

Recently Passed Legislation Results in Tax Changes for 2020 and 2021

You Should Check Your Social Security Statements When Doing Your Taxes