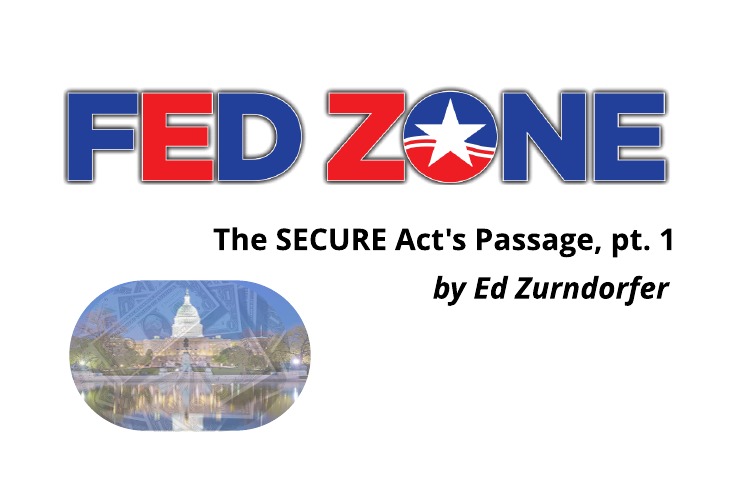 Before adjourning in late December, Congress enacted a $1.4 trillion year-end spending bill that keeps the federal government running through Sept. 30, 2020. President Trump signed the legislation. Tucked away inside this spending legislation is the Setting Every Community Up for Retirement Enhancement (SECURE) Act which includes significant changes to individual retirement arrangements (IRAs) and retirement plans, including the Thrift Savings Plan (TSP). In the first of two FEDZONE columns discussing the SECURE Act, this column discusses the most important retirement planning changes to IRAs and to the TSP resulting from the SECURE Act passage, including the advantages and disadvantages of each change affecting federal employees and annuitants.

Advantages: For federal employees who work past age 70.5, or who are retired and over age 70.5 but who have spouses who continue to work, the SECURE Act now allows these individuals to continue contributing to some type of an IRA. Note that previously before the SECURE Act passage, such individuals over age 70.5 were prohibited from contributing to a traditional IRA but could contribute to a Roth IRA (assuming these individuals’ modified adjusted gross income (MAGI) did not exceed specified limits depending on one’s tax filing status).  Of course, any employee can contribute to a “nondeductible” traditional IRA (there are no MAGI restrictions) and immediately convert that traditional IRA to a Roth IRA (this is called a “backdoor” Roth IRA). If the conversion is performed almost immediately after the contributions are made to the traditional IRA, then no tax will be due as a result of the Roth IRA conversion. Note that Congress did not change the rules with regard to the establishment of “backdoor” Roth IRAs. With the SECURE Act passage, individuals over 70.5 with earned income who cannot contribute to a Roth IRA (because their MAGI exceeds the limit) can perform a “backdoor” Roth IRA conversion because they can now contribute to a nondeductible traditional IRA.

If the employee is not eligible to contribute to a Roth IRA because of too large of MAGI, then the employee is best off contributing to a nondeductible traditional IRA and then performing a Roth IRA “backdoor” conversion. It should be emphasized that a Roth IRA “backdoor” conversion can be challenging from the standpoint of tax reporting and should only be performed under the guidance of a tax professional who has experience in and fully understands the tax consequences of Roth IRA conversions.

Changes the age of initiation for required minimum distributions (RMDs) from 70.5 to age 72 for all retirement accounts subject to RMDs, including the TSP.

Advantages: While this is not a huge change, it is nonetheless RMD relief for those individuals who own traditional IRAs and/or TSP participants who have retired from federal service and who don’t need or want their RMDs and will only take their RMDs because they are forced to do so. As an added benefit, people understand the concept of turning 72 a lot more than they do turning 70.5 (and figuring out their first RMD age factor, which in turn varied depending on whether their birthday was in the first or last 6 months of the year, due to the ½ year age trigger). Therefore, explaining when RMDs need to begin, and the calculation of the first RMD, should become at least a little bit easier in the future. As is true with current RMD rules, individuals reaching the requisite age of 72 (instead of 70.5) will still be able to delay their first RMD until April 1 of the year following the year for which they must take their first RMD (the required beginning date or RBD). This means, for example, an individual becoming 72 on January 17, 2023, can delay his or her first RMD until as late as April 1, 2024. That first age-72 RMD will be calculated using the age-72 life expectancy factor (25.6 or 3.91%). Pre-SECURE act, that individual would have had to take his or her first RMD no later than April 1, 2022, using an age-70 life expectancy factor of 27.4 or 3.65%. This is particularly helpful for individuals born in any year after 1949, during the first six months of a calendar year.

Disadvantages: Only individuals born after June 30, 1949 can take advantage of the new law. Raising the RBD to age 72 means a larger percentage of the IRA and/or TSP balance must be taken (3.91 percent versus 3.65 percent of the account balance) in the first year.

Advantages: Many federal employees and uniformed service members have children or other family members who are working on graduate degrees (Masters, Ph.D.) or are pursuing postdoctoral opportunities. They are receiving fellowship and/or stipend payments that while considered taxable compensation, until the passage of the SECURE Act this income did not count as far as allowing these individuals to contribute to some type of IRA (traditional or Roth). These individuals also may not be married or if they are married, their spouses do not have earned income which will allow them to contribute to an IRA. Now these individuals (and their spouses if married) can contribute to some type of IRA which, for many of them, means starting to save for their retirement in their 20’s which they are highly encouraged to do. Starting for the calendar year of 2020, they can contribute as much as $6,000 ($7,000 if they are age 50 or older) to an IRA.

Disadvantages: There are no disadvantages to this provision of the SECURE Act.

New Exception to the 10% Penalty for Childbirth or Adoption

Advantages: Young parents will have additional money available to them to pay for the cost of having or adopting a child. This could be particularly helpful for a single parent with no spouse or partner. The distribution from the qualified retirement account or IRA could be used to pay any expenses, provided the distribution is made after the qualifying event. In reality, because there are no restrictions as to how the distributed funds are to be spent (need not be for birth/medical expenses or adoption/legal expenses), the $5,000 could be withdrawn from a qualified retirement account or IRA to go on a vacation to celebrate the birth or adoption. This assumes the $5,000 distribution occurs within one year following the birth or adoption. If a parent has to take time off (and must take a leave of absence with no compensation) in order to have a child or to adopt a child, then the $5,000 may be very helpful for reimbursing expenses associated with the birth or adoption of the child. Once the parent returns to work, the retirement account or IRA can be reimbursed.

Disadvantages: When the amount is withdrawn from a retirement account or a traditional IRA to pay for qualified birth or adoption expenses, although there is no IRS early withdrawal penalty, federal and state income taxes will still have to be paid on the amount withdrawn from a qualified retirement account or a traditional IRA. If the amount withdrawn is paid back, then after-taxed funds will be used to pay back the amount withdrawn. And once the funds used to repay the amount withdrawn are themselves withdrawn, then federal and state income taxes will have to be paid – again on those same funds. This means double taxation on the amounts original withdrawn. This situation is no different than a TSP loan (emanating from a traditional TSP account) in which after-taxed funds are used to pay back a TSP loan and these same after-taxed funds will be taxed again when they are withdrawn from the TSP account. Worse of all, funds withdrawn from an IRA or qualified retirement account will lose earnings while they are no longer held within the IRA or retirement account. Consider the example of a federal employee who is 26 years and withdraws $5,000 from his or her TSP after either having a child or adopting a child. The employee is 27 years old and has no intention of paying back the $5,000. Assume the $5,000 is invested in the TSP “C” fund which, according to, Morningstar ratings, has an annualized portfolio average return over 60 years of 10 percent*. Assume the individual has no intention of paying back the $5,000. When the individual becomes age 67, the $5,000 withdrawn at age 67 would have lost at least 40 years’ worth of earnings at an average return of 10 percent*. Had the $5,000 stayed in the TSP “C’ fund, the $5,000 would have grown to $226,300. With two parents each drawing $5,000, the combined $10,000 would have grown (assuming an annualized return averaging 10 percent*) to $452,000. With more children and subsequent $5,000 childbirth or adoption distributions, a married couple could stand to lose over $1 million in potential income for their retirement. In short, the $5,000 distribution is in many ways similar to a TSP loan in that: (1) It should be used as a last resort; (2) even if it is paid back, the lost earnings on the amount distributed in most cases cannot be “made up” and are lost forever; and (3) if the distribution is paid back, taxes will have to be paid twice on the amounts distributed – the first time when the amounts are distributed and the second time after the amounts are paid back the same funds and subsequently distributed taxes will again be paid.

*Past investment performance is not indicative and no guarantee of future investment return.