Biden Wins Election, What This Means for the 2021 Federal Pay Raise 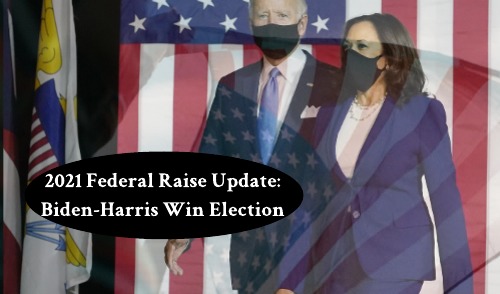 The reluctance of Trump to concede, and the projection of a Biden win, leaves 2021 Federal Pay Raise up in the air.

Although the President has shown no signs of conceding the election anytime in the next few days, and all major news organizations have projected Joe Biden to become the 46th President of the United States, there is suddenly a jolt of uncertainty regarding the upcoming weeks before the inauguration. As Jennifer Meyer reported in October, there has been little indication that the 2021 Federal Pay Raise will be anything other than the 1% specified in Trump’s budget proposal. However, there could still be some action in Congress that shifts the current situation.

Congress and the Budget

A budgetary measure must be passed by December 11th to keep the Government funded. This raises the question of whether Congress could get a 2021 fiscal budget together that would also receive Trump’s signature. If not, there’s the most probable outcome: another continuing resolution will kick the can down the road to be dealt with by the legislators that will occupy Capitol Hill during the Biden Administration. While it is feasible that Trump could refuse to sign the resolution, too, and thus cause another shutdown, this does not appear to be an issue yet. As the deadline draws closer, it will be something for Federal Employees to keep their eye on.

The 2019 Federal pay raise was 1.9% but it wasn’t official until after the longest shutdown in Government history occurred. Before the Federal Government re-opened in February 2019, Federal Employees were looking at a possible pay freeze for that year. When Congress did eventually get a budget through, Federal workers received 1.9% and it was retroactive, backdated to January 1st. Some experts believe a similar thing could take place with the incoming Congress and President, meaning with or without a shutdown, Joe Biden could sign a budget that gives the Federal workforce a retroactive pay increase for 2021.

Ready to Retire? A Glance at the First Year of Federal Retirement