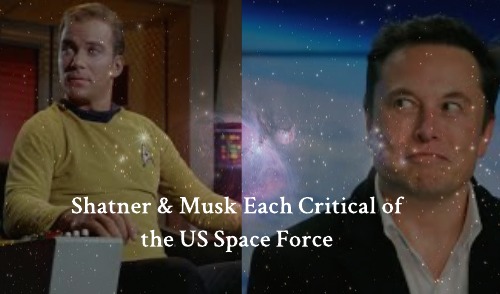 Both the CEO of SpaceX and the television star from ‘Star Trek’ recently released their criticisms with the newest military branch, the Space Force

Last month, the US Space Force awarded a lucrative DoD contract to both SpaceX and its competitor, ULA (United Launch Alliance) to conduct future classified missions that would launch payloads into orbit for the newly added military branch. Elon Musk, the CEO of SpaceX, was suspiciously silent on receiving the award- of which the company received a 40% share. Via twitter, the charismatic corporate leader eventually indicated his displeasure was due to ULA getting the remaining 60%. Musk has been public about his gripes with ULA before. In 2018, he went so far as to say he would eat his “own hat with a side of mustard” if the Vulcan-Centaur rocket system, developed by ULA, was able to fly before 2023.

A History of Litigation

SpaceX sued the Government around 2006 over anticompetitive behavior revolving around the DoD’s disbursement of rocket contracts. The Government responded by contracting ULA, therefore demonstrating that there was competition in the field besides Boeing and Lockheed Martin. Of note, ULA has been launching satellites for the DoD since around this time. More recently, the company worked with NASA in June to launch the Perseverance rover to Mars- which is set to arrive on the red planet in February 2021.In 2014, when Russia invaded Crimea, SpaceX sued the Air Force for using the Atlas V rocket as it relied on sanctioned Russian-made engines. The Atlas V and Delta IV rockets, both developed by ULA, are models that can only be used once and cost $400 million per launch. Musk has often criticized both the cost and single-use attribute of ULA’s rockets. The lawsuit was dropped in 2015, after the DoD allowed SpaceX to compete for these defense contracts.Currently, there is a still an ongoing lawsuit occurring between SpaceX and the DoD. Musk’s company has argued that they were shut out of a program to develop the Falcon Heavy rocket system.

No Captains in Space

William Shatner, on the other hand, has a different bone to pick the US Space Force. Having gone with the Air Force and Army’s ranking system as opposed to the Navy’s, Shatner argues that this goes against conventions established by over a century of science fiction works. Basically, in the Space Force, Captain Kirk would have been Colonel Kirk. “Throughout entertainment history, which actually precedes actual space flight history by decades,” Shatner wrote, “we had captains.” The 89-year-old actor also argued that the Navy’s rankings make more sense for space because of the similarities between nautical ships and space “ships.” The structure of command has not yet been decreed by Congressional legislation, so it is in the realm of possibility that the Star Trek star will get his wish yet.