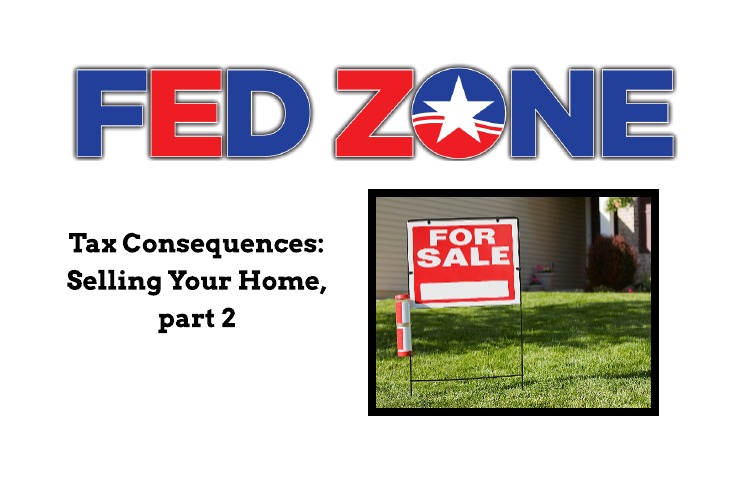 This is the second FEDZONE column discussing the tax consequences of selling one’s personal residence. Read Part One Here.

This week’s column discusses when the sale of a personal residence results in a net gain and can be excluded from federal income taxes under Internal Revenue Code Section 121. The exclusion from tax applies to an individual’s primary personal residence, and not to a second home, a vacation home or a to rental property.

An individual can exclude from income up to $250,000 of capital gain from the sale of a personal residence if the following three tests are met:

Note the following: (1) a personal residence sale gain attributable to a period of nonqualified use cannot be excluded from taxation. A period of nonqualified use is generally any time (after 2008) that the property is not used as the individual’s primary personal residence; (2) unmarried individuals who jointly own a primary principal residence may each exclude up to $250,000 of capital gain if the three tests above (ownership, use and frequency) are met.

Married couples filing a joint return can exclude up to $500,000 of capital gain under the following conditions:

Note that on a married filing joint tax return, up to $500,000 of capital gain can be excluded from capital gains tax as long as either spouse meets the ownership test. Both spouses must meet the use test and neither spouse has excluded a capital gain in the last two years. The following example illustrates:

Variation. Same facts except that Susan did not move into the house until she and Carl were married on February 1, 2020. On August 1, 2020, when they sell the home Susan does not meet the use test. Carl can exclude only $250,000 of gain even if they file married filing joint.

If both spouses own homes and each meets the ownership, use and frequency tests, then each spouse can exclude up to $250,000 of gain on his or her own home. The following example illustrates:

The $500,000 capital gain exclusion amount that applies to individuals filing a joint tax return also applies to unmarried surviving spouses if the sale occurs within two years of the death of their spouses. To qualify: (1) either the surviving spouse or the deceased spouse must meet the two-year ownership requirement for the residence immediately before the spouse dies; (2) both spouses must meet the two-year use requirement immediately before the spouse dies; and (3) neither of the spouses may have used the exclusion during the past two years. The following example illustrates:

Example. Howard and Betty are married and have owned and used their personal residence since March 1, 2002. On April 17, 2020, Howard died, and Betty inherits his interest in the home. IF Betty sells the residence before April 17, 2022, she will qualify for the $500,000 capital gain exclusion.

Suspending the Ownership and Use Test Periods

Eligible individuals include: (1) members of the Uniformed Services (Army, Navy, Air Force, Marines, Coat Guard); (2) members of the Foreign Service; (3) members of the Intelligence community (CIA, Homeland Security); (4) Peace Corps employees outside the U.S.; and (5) Peace Corps volunteers and volunteer leaders serving outside of the U.S. The following example illustrates:

Example. Curt bought and moved into a personal residence in 2011. He lived there as his primary personal residence for three years through 2014. For the next six years, he did not live in it because he was on qualified official extended duty overseas in the Foreign Service. He then sold his personal residence in 2020 at a gain. To meet the “use test”, Curt elected to suspend the five-year rule test period for the six years he was on qualifying official extended duty. He meets the ownership and use tests because he owned and lived in the home for three years during the test period.

The following is a summary of the two-year test rules for excluding the $250,000/$500,000 capital gain resulting from the sale of a personal residence:

Individuals who do not meet the two-year ownership and use tests or who use the $250,000/$500,000 capital gains exclusion more than once in a two-year period may qualify for a reduced exclusion. A reduced exclusion is available if the primary reason the individual sold his or her primary personal residence was due to: (1) change in place of employment; (2) health; or (3) unforeseen circumstance. Note that for each of these reasons a “safe harbor” is available. If the safe harbor is not met, an individual can still satisfy the conditions based on facts and circumstances.

The following events qualify as unforeseen circumstances: (1) an involuntary conversion of the home; (2) natural or man-made disasters; (3) loss of job resulting in being eligible for unemployment compensation; (4) divorce or legal separation; (5) multiple births resulting from the same pregnancy.

The following example illustrates: Frank and Joan, a married couple, bought their home in Virginia on May 1, 2019. They lived in the home for 13 months. Due to a job relocation, they sell the Virginia home on June 1, 2020 and move to Chicago. Since the move was job-related, they qualify for a reduced exclusion, shown as follows:

The result is that Frank and Joan can exclude up to $271,000 of capital gain on a house they owned for only 13 months.