Social Security for Feds: the W.E.P. & the Earnings Test 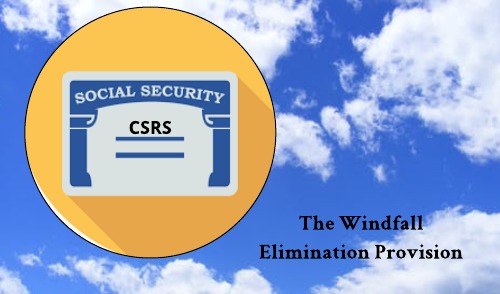 Social Security for Federal Employees: The Windfall Elimination Provision and the Earning Test

As of December 2015, there were 1.7 million social security beneficiaries impacted by the Windfall Elimination Provision (WEP). The calculated restriction on benefit amounts affects retirees who receive a pension for work not covered by social security, such as federal employees under the old CSRS (Civil Service Retirement System). Basically, because they didn’t pay into social security during the years of labor that generated the pension plan, any social security income triggered by another job is cut to a significantly lower number. Without getting too technical, normal social security payouts include roughly $770 (90% of the first $856 dollars of someone’s “Average Indexed Monthly Earnings”, 2016). The WEP subtracts 40% from the 90% used in the usual formula, meaning the $770 mentioned above would be reduced to $428 (after subtracting about $342). The statement of benefits received from the Social Security Administration will not indicate this possible reduction in a participant’s estimated payment, so the WEP has a tendency to catch some people off-guard. FERS employees, those who have 30 or more years of substantial earnings that did pay into the Federal program, and others under some more obscure exceptions are unharmed by the WEP. While Congress proposed a bill in 2015 (HR 711) that would’ve eliminated the WEP, the National Association of Active and Retired Federal Employees (NARFE) raised concerns that postponed the legislation indefinitely. Presidential Nominee Joe Biden has hinted that if elected, he would reconsider the elimination of the WEP again.

A last item to consider in regards to social security benefits is the earnings test. For Feds specifically, it is important for FERS workers who earn the Special Retirement Supplement (SRS) because a similar rule applies there as well. Essentially, someone who takes either the SRS, or takes social security prior to their full retirement age, cannot earn a certain amount ($17,040 in 2018) and collect their full payment. For every 2 dollars earned over the limit, 1 dollar is slashed. Note that pension income and investment income do not count toward the earnings test- it strictly based on earned income. Also of significance, the lost amounts are returned to the worker through a higher monthly payment after reaching full retirement age, but this is not a lump sum. The refunded money is distributed proportionally over several years, so the beneficiary would have to live long enough to recoup the full amount.